On Monday, September 17, 2012, the Charleston West Virginia Gazette and Daily Mail websites required readers to use Facebook, exclusively, for posting comments on news stories. Facebook? Exclusively? Really? This new Facebook system for online commenting replaces one that had been hosted, I believe though cannot confirm, by the newspaper website. (Charleston West Virginia Gazette and Daily Mail is co-owned by Media News Group and the Chilton Family. ) 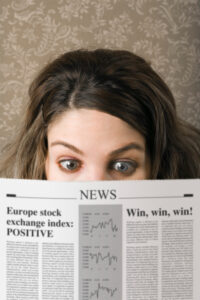 I don’t know about you, but this definitely raised my eyebrows…I’m wondering…

It certainly raises some privacy issues for me. Although I never comment anonymously on social media, having my Facebook (profile) photo and name is more personal and social— semi-private, limited to close friends—not something I want to share with the universe of newspaper readers.  This alone will deter people like myself, an educated, thoughtful, (somewhat) responsible person from posting a comment on a news story. Do they not understand that?

Here’s how it works.

“Readers who are logged into their Facebook accounts will be presented with a comment box at the bottom of select stories. Upon sharing their thoughts and/or interacting with friends or other readers, their Facebook photo and name will appear next to the comment. [emphasis added]

“Please note that a box underneath the comment field will need to be unchecked if you don’t want your comment to show up on your personal Facebook wall.”

I don’t know about you, but I’ve seen some pretty “funky” Facebook profile photos. Do we really want to see those in the newspaper? Will responsible commenters have to change their profile pics to suit prime time viewing? Or, will those less social media savvy commenters be caught off guard? Don’t we have enough to worry about regarding Facebook privacy?

Are you sitting down? (…the spin will make you dizzy)

Here’s why the newspaper made the change, or so they say:

“Why are we making this change? For a couple of reasons: First, while false Facebook accounts are a legitimate concern, most accounts are registered to the actual user, which means comments are tied to a real person rather than an anonymous screen name. It is our hope that this will raise the level of discourse on our websites.

“Second, this will accelerate the pace of our online comments. Readers’ reactions will appear on a story as soon as they are made. We will moderate the comments after they are posted, and if an offensive comment is made, a moderator in the newsrooms can remove it or even ban a user from ever commenting on the sites again.

“Also, Facebook filters will be in place to weed out vulgar comments. The filters are, at times, a bit overzealous and might misinterpret words or parts of words as unacceptable. If you make a comment and it doesn’t appear, it is awaiting moderation by someone here in our newsrooms.

“Overall, we hope this improves the tone of the comments by providing accountability and makes your visit to our websites a better experience.”

Now, I’m not a regular reader of this newspaper so I’m not familiar with the type of comments they get on their stories, but one can assume that many were pretty low brow as this move is hoping to “raise the level of discourse on our websites.” I do know the Miami Herald (McClatchy) uses Disqus for their commenting system, allowing readers the option of signing in using their Facebook, Twitter, Disqus, or existing MiamiHerald.com username and password. Seems a more balanced approach to me.

Would you use Facebook exclusively for comments on your law blog?

Law firm bloggers often use third party commenting systems on their blogs, most use the built in systems if they’re using WordPress or Blogger platforms, but I’ve seen no one that uses Facebook exclusively for a comment system, and I doubt I ever will. It’s just not practical. I know lawyers, doctors and other professionals that avoid Facebook like the plague. Would you want to block potentially intelligent comments from your blog posts merely because someone did not have a Facebook account? No, of course not. And, I’m going to be watching to see how long this Facebook exclusive system lasts.

What do you think the fall-out of this move will be? Is the Charleston Gazette and Daily Mail blazing a trail? Do you see Facebook becoming the new Web? It certainly notches up the possibility a bit in my mind–and perhaps theirs. Alternately, it could kill comments on the Charleston Daily Mail website, and maybe that’s the intention?