Baker McKenzie beat Skadden in gross revenues in the 2010 AmLaw 200 list taking over the top spot for the first time since 1994. That’s a big deal, I guess.

Ben Hallman writes in “Behind the Numbers: A Change at the Top”, (The American Lawyer, April 19,2010) that Baker McKenzie, the largest U.S. based law firm with nearly 4,000 lawyers in 39 countries, although #1 in gross revenues took a hit in profits per partner—now falling just below the 1 mil mark. Probably a bigger deal, I guess, because the firm has cut staff and lawyers significantly in order to get that number back where it belongs. (Author acknowledges this is a big deal to those people and sincerely feels their pain.)

But, most interesting to me, in writing this post about branding, are the brief comments in Hallman’s article where Baker McKenzie Chairman, John Conroy, Jr. attributes some of their success to a “rigorous branding analysis.”

“Still, surpassing Skadden to lead The Am Law 200 is a notable accomplishment. Conroy credits his firm’s success to a “rigorous branding analysis” that led to an office-by-office and practice-by-practice review.”

Says Conroy of their numbers:

“The result reflects the client response to our efforts. We’ve made a real effort to implement our strategy [emphasis added] as relentlessly as possible. It always helps when financial results vindicate our work.”

Baker McKenzie recently took home the prestigious top prize in the Identity Category at The Legal Marketing Association’s 2010 Your Honor Awards. Indeed their new brand was a visually well executed entry, however, if I’m reading Conroy’s comment correctly it wasn’t the visual results that made the re-branding most valuable to the firm and its clients, it was the process—the rigorous branding analysis—and the outcome of that exercise that enabled them to re-connect with clients and ultimately drive their revenues. A lesson for anyone in the throes of re-branding…your comments welcome.

The re-branding helped the firm to focus on their potential– we can assume –and to assess and draw up a strategy to meet what their clients’ value most in the delivery and execution of their services. We may also assume that “an office-by-office and practice-by-practice review” was essential for all professionals in the firm to get on the same page.

In this author’s opinion, therein lies the essential value of branding. Only after that hard work of self-analysis—who we are and what our clients’ value—is done can a firm focus on brand communications such as websites, social media interaction, and content offerings. This is not a task for the weak of mind or self-centered, egoist entity.

Once the brand is actualized, the words and visuals should combine to tell your true story, connect with the audience and evoke a response. It takes all that to be successful. If your brand—who you are—resonates with the client, it won’t be hard.

Heather Milligan writes over on the Legal Watercooler:

“Any attorney who has ever worked with me knows my first command is: make certain that the client sees him/herself and their problems (along with your solutions) in your marketing materials (practice descriptions, attorney bios, client alerts, PowerPoint presentations, etc).”

Heather’s comments reminded me of an email I received recently that illustrates the first command concept, albeit in a whimsical way:

A blind boy sat on the steps of a building with a hat by his feet. He held up a sign that said:  “I am blind, please help.” There were only a few coins in the hat. 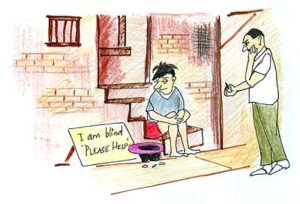 A man was walking by. He took a few coins from his pocket and dropped them into the hat. He then took the sign, turned it around, and wrote some words. He put the sign back so that everyone who walked by would see the new words. Soon the hat began to fill up. A lot more people were giving money to the blind boy.

That afternoon the man who had changed the sign came to see how things were. The boy recognized his footsteps and asked, “Were you the one who changed my sign this morning? What did you write?” 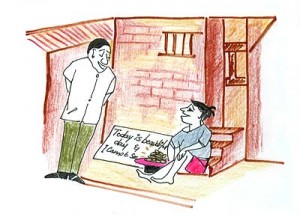 The man said, “I only wrote the truth. I said what you said but in a different way.” I wrote: “Today is a beautiful day but I cannot see it.”

Both signs told people that the boy was blind. But, the first sign simply said the boy was blind, putting the focus on features; i.e. I am blind, I am a litigator, I am a Super Lawyer, I try “bet the company” cases.

The second sign told people that they were so lucky that they were not blind. The focus shifted to client, i.e., my world, my options, my values, my opportunities.

Should we be surprised that the second sign was more effective?

Although this is a simplistic illustration, and some may argue manipulative, it is what a client saw in the boy’s brand that was valuable to him—a reminder that the day was beautiful and he could see it—the client wrote the message for him. It expressed the client perspective and resonated meaning to others as was evidenced in this non-scientific study which resulted in an increase of gross revenues (tee hee).

Despite the flaws in the illustration, are you asking your clients’ what they value in your services and expertise—specifically?

Bottom line: branding wears two hats; corporate-actualization seeking to understand the full potential of what you have to offer a client and, artfully communicating those benefits in a way the client can see him or herself and their problems in the context of the law firm’s brand.

Nothing new, nothing shocking here; but serves as a reminder that…