It’s no trivial thing: the social web opens access to some amazing people that I would not otherwise had the opportunity to meet. It really works – on many levels.  It’s absolutely fascinating to me; geography, culture, time, and professional status are no longer an obstacle to growing my network. It gets more interesting every day.

I recently met attorney Robert H. Thomas, one of the preeminent land use lawyers in Hawaii (I live in FLORIDA!). He blogs at inversecondemnation.com and @invcondemnation on Twitter. I had an opportunity to take our online conversation off-line to chat with him on the phone the other week. Here’s his story…..

Robert’s been in private practice for 30 years. Up until four years ago, he published articles, gave presentations, was active in the American Bar Association, and hit the local cocktail circuit as much as he could in order to build his practice. Marketing was slow going. Then, in 2006,  he published his blog, inversecondemnation.com, and everything changed.

Inquiries accelerated and the pace of his workload intensified. Today, he tracks almost ALL of his new business and ALL of his connections with journalists, including national and global media interests, back to his blog.

Blogging is like getting to hear your lawyer think out loud before your hire them.

No small task, he landed two Fortune 100 companies as clients; a direct result of his blogging. They didn’t contact him to submit a proposal; they contacted him to do the work. They found his blog on a Google search, and after reading his posts they knew he had what it would take to do the work they needed.

Contrary to his prior networking experiences at ABA events, people began approaching him as if they already knew him. They read his blog, they knew his voice, something about him, and it made him much more approachable. His networking effectiveness increased noticeably.

Journalists started calling him for background on related legal cases after his blog took off. He now knows everyone in the local media and many national and international journalists because he blogs, twitters, and cruises around LinkedIn (LI). At first he fed them background on cases that were not his, but he nurtured the relationships to become a trusted source. Now, when Fox News is looking around Hawaii for a story, they contact him and ask for HIS stories.

Not a solo journey.

To build readership for his blog, he ventured into social networking. He originally split up social networking duties with a partner; he took LI and the other guy took Facebook (FB). His partner reported that FB turned up too many “x-girlfriends” so he stayed clear :-), at least for a while. Then the ABA Eminent Domain section launched a FB page and he was sort of forced into it. 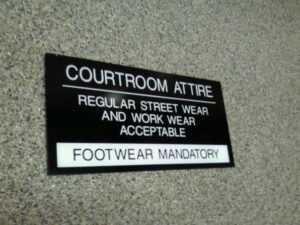 Still a bit skeptical of the FB value proposition, he’s found some rather original ways to participate. He stays away from political discussions and other conversations that have the potential to be heated. Instead, he takes pictures of signs in the courthouses he frequents and posts them to the group page and his profile. Funny signs like the one he found in a Hawaiian courthouse: “Court Room Attire | Regular Street Wear and Work Wear Acceptable Footwear Mandatory.”

Robert takes an open approach to sharing content because he knows the value keywords have in getting found by search engines.

Cross publishing his blog content to other networking sites or document sharing sites like JDSupra has a multiplier effect. For example, often the same article will return higher in results from a JDSupra posting than his own blog. This led him to start posting his legal briefs on document sharing sites, but not without first getting major resistance from some partners who were concerned about giving away work product.

He argued that this type of transparency is valuable to business development. Any work product he would share is already in the public domain. He reasoned that anyone can get it from the courts online, so why not have it out there where Joe Public can find it and associate it directly to him. If another lawyer wants to lift case cites from the brief, so what.

“We’re not selling documents, we’re selling brains. It’s not like they can download the brief, plug in new names and win a case.”

Only he can craft his case and argue it. The brief is only part of the package. Makes sense to me. (Good lawyering!)

The keyword play he gets from posting his briefs works really well in online search and makes it a smart integrated strategy.

If it all sounds easy, it’s not. It takes work, time, and commitment.

Quick to point out, Robert views his blogging and social networking activity as a critical, vital, and exciting part of his practice. He writes a half hour a day, every day, and posts three to six times a week, plus promotes his ideas and thoughts on Twitter and LinkedIn. Vacations? No sweat. He loads up his posts and times them to go out while he’s gone.

His blog is mostly pure information and little analysis so it takes less time to craft a post, however, it’s a skill set that not everyone can master and identifying topics to report on daily requires good organizational skills. An unexpected benefit of publishing his blog; his writing has improved and his subject matter knowledge stays fresh. He noted that this really pays dividends when writing client communications and other legal documents as well as expands his industry knowledge.

The results of his work have inspired his colleagues to successfully launch law blogs.

The story of inversecondemnation.com is not as uncommon today as it was when Robert first started blogging. Although he wasn’t a trailblazer, he was a member of the first wave of lawyer bloggers.

Mark Murakami produces www.hawaiioceanlaw.com, which, as the title indicates, focuses on maritime and environmental issues, although it is not limited to Hawaii. Mark is a former Coast Guard lawyer and ship captain, so he brings some experience to his blogging. He is just over the two-year mark on his blog.

Tred Eyerly produces www.insurancelawhawaii.com, which focuses on coverage issues, again, not limited to Hawaii law. Tred is the chair of the ABA subcommittee on coverage issues and has developed a very expansive reputation as an expert in this area of law. He’s in his third year of blogging.

Robert’s final comment to me on the phone was:

“I’m shocked that not more lawyers are taking advantage of the reach and exposure social media provides.”

Me too. While writing isn’t for everyone, there is something for everyone on the social web. If you need help finding what that is, drop me a note. I welcome the conversation and another new contact in my network!

Got a story? I’d love to hear it. Feel free to email me or share with everyone in the comments. Thanks!

Written By
Jayne Navarre
More from Jayne Navarre
And now for something REALLY fun…. This post may not be directly...
Read More