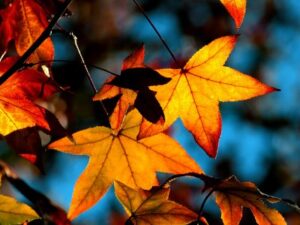 Something other than Autumn leaves is in the air. This week I’ve seen mentioned three high profile instances of individuals and institutions going on a social media blackout or brown-out and I admit my online activity has waned in the past few months — not because of choice but because I’ve got dozens of more immediate tasks (and relationships) to attend to. Anyway, here’s the rundown…

On Monday, it was Harrisburg University announcing an experiment to lock down access to social sites on all campus servers. According to Higher Ed;

Eric Darr recently had a moment that a lot of modern parents can relate to. He was watching his 16-year-old daughter click around frenetically on Facebook while juggling several conversations on her iPhone.

“I was frankly amazed,” says Darr, the provost at Harrisburg University of Science and Technology. “I thought, ‘How do you live like this?’ It struck me to think, ‘What if all this wasn’t there?’ ”

So Darr conceived an experiment designed to parse how one lives with social media — precisely by examining how one lives without it. He decided to pull the plug on Facebook, Twitter, MySpace, and AOL Instant Messenger for one week. But rather than conduct the experiment within his own home, Darr decided to take advantage of his position as Harrisburg’s provost to tap a much larger sample: his institution’s entire student body, faculty, and staff.

On Tuesday, Chris Brogan posted this: Find Your Blinders:

Over time, I’ve been putting on very important blinders, one technology at a time. You see, our tools give us this “eyes wide open” blast-in-the-face exposure to information. We get text messages. We get tweets. We get email notifications. We get phone calls.

I have blinders on.

My phone doesn’t beep, buzz or blink when I get a SMS text message. I have to go find you when I’m ready to deal with you. My computer doesn’t ding or light things up when I get email. Not even my Twitter app.

I’m doing my best to direct my attention towards what matters: people, work, the future. Do I really want a tweet to draw me away from that?

On Wednesday, I opened the sports section of The Key West Citizen and found this:

Miami’s football players just got the direct message: No more Twitter. The 17th ranked Hurricanes have been told to stop using accounts on the popular social network, the university’s athletic department said Tuesday making the announcement, yes, through it’s own Twitter feed. …. The goal is to limit distractions and focus..

The article by Tim Reynolds of the Associated Press (Sun Sentinel version here) also reported that a random check of Miami player accounts showed no activity since the announcement and several players had deleted their accounts. I’m anxious to learn if the blackout will work and to what effect.

Are we getting burnt out? Anyone working on a social media diet?

The demise of social media and networking has been predicted by some for a while now, here and here, but still, online users are flooding the bandwidth and new sites are launched daily, while tried and true sites continue to tweak and improve their offerings. Just a few short months ago EVERYONE was jumping on board to try their hand at cruising the social scene online looking for both personal and business opportunities. Unfortunately, those with get-rich-quick business development hopes may be building a house of cards—burn-out is for real…if you’re not careful your intake becomes a slippery slope and before you know it you’re sitting in the mud puddle trying to figure out what to do next.

What can we learn from this?

I don’t know about you, but for me, I’ve always worn a media filter and social media is no different. I love the global access to ideas, people and conversations the Internet makes possible, but I have to keep it real. Any engagement with media, especially the user generated kind, is an add-on. As a business tool there are great advantages, but for me, these advantages only exist in the context of fundamental business principles, real people and real relationships.

I’ll go out on a ledge here to say that I think the generation growing up with the Web and all it’s social media accouterments is kind of making up the game as they go along. It is parallel in many ways to those fake reality TV shows. My kids will tell you — I banned them from watching. I’m sure they can still hear my nagging words: “Go out and live your own experiences.”

It may be time to take a step backwards and align online activity to supplement what was working before the social bandwagon rolled into town. Perhaps the bit of old-fashioned wisdom in the actions of Harrisburg U’s provost and UM’s football coach is the ticket? What do you think?

How are you managing your social media tether?  I try to take it one step at a time, manage my time, AND my expectations.